The trek from New Jersey to the Manhattanville Factory District of West Harlem to check out the Rum Hall, Solomon & Kuff was a worthy one.  In the 1700’s a young West African boy given the name Venture Smith was sold as a slave for four barrels of rum and shipped off to Barbados.  By the grace of God he purchased him and his family’s freedom many years later.  Solomon and Kuff were the names of his sons.

After reading the back story and my love of brunch – honey, it was only right to set a date and have it be the meeting place for fellow lady Chef, Deborah Caplan and I to meet.  Standing no more than 5’2″ she has worked as a personal chef for most of her early twenties.  A strong and knowledgeable chef she’s competed and won season 26 of the popular Food Network’s series: Chopped and made it all the way to the last round of the Chopped Champions.  To have the opportunity to brunch with her, to hear all about her kitchen stories and culinary pet peeves brought the right amount of sunshine in my heart on May’s first and rainy day.  Her plans of migrating to Europe to continue working and learning in the industry was put on hold when she came highly recommended to one the Industries leading celebrity and executive Chefs, Alexandra “Alex” Guarnaschelli.  Now, the only lady on the hotline she works at Butter Midtown.  I’ve seen her in action behind the high flames of the large industrial stoves and the only word that comes to mind is Beast!

Family is ranked highest on her ‘most important’ list.  On her days off she relaxes and catches up with her large family, snapping pictures and videos of her nephew and nieces singing songs from Disney’s classics or reciting the capital cities of the US states.  Deborah is also training for the Airbnb Brooklyn Half 2016 coming up in a few weeks.

Solomon & Kuff – The Space
Hidden under the viaduct in West Harlem at 12th Ave. and 133rd Street.  I entered and was greeted by the friendly smiling hostess.  From the short walk to my table I heard the lyrics of Peter Tosh’s ‘Brand New Second Hand’ playing from the speakers.  Followed by classic jazz that reminded me of times my Ma tuned into Radio 100FM in Trinidad.  They always played pan-jazz and slower ‘old time’ calypso sung by the likes of The Mighty Sparrow and The Lord Kitchener on Sundays.  From the music alone I knew this restaurant had that easy vibe I was looking for.  From my seat next to one of the large windows I had a great view of dining area and the bar, stocked with an extensive and impressive liquor & spirits selection.  Plastered high on the walls were maps of the archipelago of Caribbean islands and halved wooden barrels that suggest the aging process of rum.  Dimmed lights, exposed brick walls and shiny green leaves of hanging plants gave such a rustic, outdoor feel to the space that just worked.

Solomon & Kuff – The Food
A lot of restaurants nowadays are proclaiming to serve up re-imagined Caribbean food but Solomon & Kuff so far has been the only one to do so.  As I reviewed the brunch options, I noticed items I grew up eating that the chefs updated nicely putting a worldly spin on classics but still highlighting those foundation dishes or ingredients; Guava butter, Scotch Bonnet Aioli, Ackee Remoulade even the cocktails took on a modern twist.

Jerked Chicken Sausage
Served as a side and enough for two people to share. 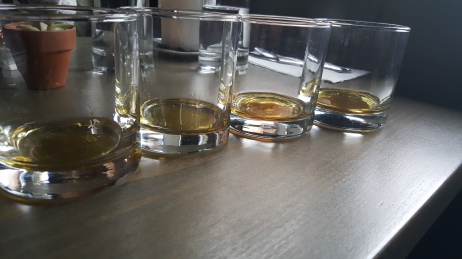 With uncomplicated and sexy vegetable, fish and meat options (no pork) on the menu and staff that assisted and gave recommendations I’ll be making the trek more often to hear of this Caribbean story told in Harlem.  Hopefully next time I’m there one or two more items are added to the desserts list; I love sweets!! 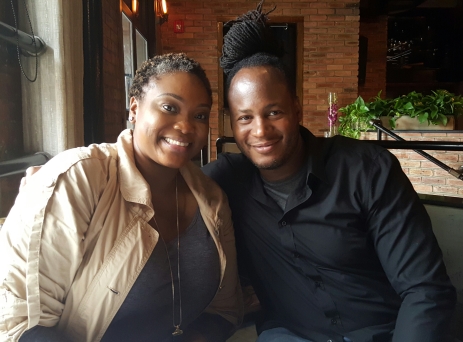 Co-owner and mixologist, Karl Franz Williams.  Super down to earth and easy on the eyes was nice enough to sit with us, answer questions and speak about the stories behind his two Harlem businesses: Solomon and Kuff and 67 Orange Street.